Marjorie Stewart Joyner  was the granddaughter of a slave and a white slave-owner, she was born on October 24, 1896 in Monterey, Virginia. She moved to Chicago in 1912, and shortly thereafter, she began studying cosmetology. In 1916, she became the first African American graduate of Chicago’s A.B. Molar Beauty School.

In Chicago, Joyner met another well-known and influential beautician and businesswoman, Madam C.J. Walker, who had invented the Walker Hair Care System and opened beauty schools around the country. Walker died in 1919, and a year later, Joyner joined Madame C.J. Walker Beauty Colleges as the national supervisor. In this position, Joyner oversaw more than 200 beauty schools. A major role was sending Walker’s hair stylists door-to-door, dressed in black skirts and white blouses with black satchels containing a range of beauty products that were applied in the customer’s house. 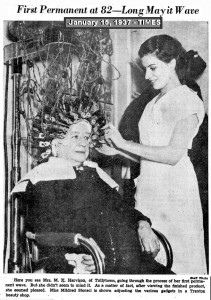 Joyner taught some 15,000 stylists over her fifty-year career. She was also a leader in developing new products, such as her permanent wave machine. Joyner didn’t receive any substantial compensation for her invention, but she has said that this never bothered her.

She helped write the first cosmetology laws for the state of Illinois, and founded a sorority and fraternity, Alpha Chi Pi Omega on October 27, 1945 as well as a national association for black beauticians.

Joyner was friends with Eleanor Roosevelt, and helped found the National Council of Negro Women. She was an advisor to the Democratic National Committee in the 1940s, and advised several New Deal agencies trying to reach out to black women. Joyner was highly visible in the Chicago black community, as head of the Chicago Defender Charity network, and fundraiser for various schools.

In 1987 the Smithsonian Institution in Washington opened an exhibit featuring Joyner’s permanent wave machine and a replica of her original salon. Marjorie Stewart Joyner died of heart failure at her South Side Chicago home on December 27, 1994, at the age of ninety-eight.