Mother-and-daughter duo (MADD), YouTube and UK Media personalities, Imani and Sue Evans, were denied entry at a Sony Xperia launch in Soho London. The incident took place on May 18, 2016, where Imani, 24 and her mother were denied entry twice, because of their skin color.

Imani states that the initial reason for denial was that the staff from PR firm Citizen Relations, said the venue was already full. They did not deny the fact that their names were not on the list, but rather that the venue had reached capacity. The two then asked the staff to find the woman who had arranged their guest-list passes via email. “We traveled all the way from Bedfordshire to London specifically for this event,” said Imani. “The lady just said there’s nothing they can do.”

With no avail, and no sign of the woman in charge, Imani, and her mother decided to leave.  Imani said she then saw TayTay Stahrz from the boy band Franklin Lake and explained to him that the venue was full and that they were not being allowed into the club. TayTay then suggests they all try again together. The staff welcomed TayTay and his two friends, stamped their wrists without mentioning the venue being full. Sue soon followed after TayTay’s friends and proceeded to put her wrist out to get stamped and was surprised by the staff’s reaction. Imani said, “As soon as she saw my mom, she pulled the stamp back and said, ‘Sorry, we are full.’ She acted like my mom had some disease on her wrist.”

It was apparent that the grounds for denial were not because the venue was full, but the fact that they were women of color. The situation was then amplified by the blatant disrespect by Citizen Relations staff after Imani asked one of them to speak to someone else regarding their denial of entry. Not only did their request return empty, but Imani also overheard other staff members making derogatory comments about Imani’s hair and skin color. She tells us, “I’ve never felt so humiliated and degraded. I’m a citizen of the UK – I was born here. My mom dealt with this same thing when she was younger, and now we’re dealing with this together.” Hurt by the actions of the staff members and already in tears, Imani walked away with her mom.

After the event Imani decided to tell her story on social media and posted: 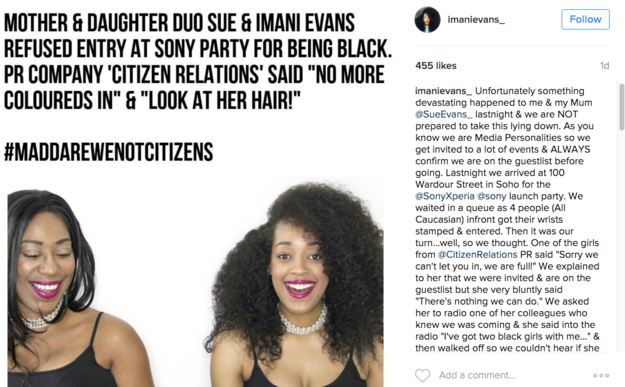 Shortly after posting her story, it has gone viral, and the support has been overwhelming.

Citizen Relations released a statement on its website which states:

As you may have read, a client event that Citizen hosted last week in London couldn’t accommodate everyone that wanted to attend, resulting in a number of people being turned away. Two of those people claimed that race was involved in this decision.

We took this allegation very seriously and immediately launched an investigation with our staff and suppliers to confirm details of what happened at the event. Now that our investigation is complete we’re confident our team acted fairly and professionally.

Further, we are confident race had nothing to do with it as we don’t stand for that and it simply wouldn’t be tolerated. That said, we’re deeply sorry for their disappointment. It has not been our team’s intent to make anyone feel excluded nor ignored in the aftermath as we fully investigated the matter.

At Citizen, we are committed to equality and diversity, and do not tolerate discrimination of any type. We believe these values are central to who we are as an organisation, and we will continue to champion equality for everyone in all areas of our work and culture.

Imani and Sue released a statement in response on their facebook page:

Citizens Relations has today issued a statement regarding the racist treatment my mother Sue Evans and I received at Sony Xperia’s launch event on Wednesday 18 May 2015. The statement is wholly inadequate, disingenuous and extremely patronising to the intelligence of not only my mother and I, but every single person that has spoken up, in solidarity with us, saying the racism we experienced is NOT acceptable. To suggest, that a thorough investigation has been carried out, when neither my mother and I have been spoken to directly, is an absolute disgrace. It would seem that in addition to there being “no more coloureds” allowed at Sony Xperia’s events, “coloureds” cannot even be extended the courtesy of being spoken to directly and the attack on our humanity at the launch event was simply a taste of what was to come.
We have been extremely hurt and disappointed by the deafening silence that has been the response of Sony. We have tried relentlessly to engage with them, but the issuing of Citizens Relations statement today indicates that Sony is trying to completely distance itself from this incident and absolve itself of all responsibility. We hope this is not the case but without Sony speaking with us directly, we can only reach one conclusion at this stage. To be clear, the racism my mother and I experienced was from two members of the team employed BY Sony Xperia to manage its launch event. To see a global company of this kind, with the reach and impetus that it has, remain completely silent about the racism that has taken place at ITS launch event, has been completely shocking to see. Sony cannot (and indeed should not want to) hide behind its PR agency and must take responsibility for itself: for the teams it hires to run its events; for the racist slurs members of that team feel comfortable making towards two women of colour; and for the reasons why those individuals felt comfortable making those slurs in the first place as they represented Sony Xperia at a Sony Xperia event. It is worrying that Sony has remained completely silent; silence suggests the endorsement of its agent’s behaviour and that racism, as many have you have asked on social media, is indeed something which is tolerated by Sony.

This is too important an issue to continue to silence and censor people on. The deletion of comments, by people who have taken to the Sony Xperia’s Instagram page to show support for my mother and I has been especially shocking to see. It would seem that Sony Xperia would rather censor people who are ultimately its consumers, than actively address the racism my mother and I experienced.

This has been an emotionally and physically draining experience for my mother and I. Ultimately, we are two women simply trying to live our lives which have been completely disrupted and made ugly by this entire incident. We again ask Sony to recognise our humanity; not hide behind its PR Agency Citizens Relations (who are a disgrace unto themselves in the way they have managed this entire episode); not issue generic and meaningless statements saying Citizens Relations or Sony believe in equality and are against discrimination by way of ‘damage control’; and actually engage with us and speak with us to show Sony truly does stand against racism and will not allow racial discrimination to take place under its watch. It is ironic, that had a simple apology been issued almost 4 days ago now, we would not be where we are now and my mother and I would not have had to continue to stand up to the mighty giant that is Sony with all of its resources and all of its power who could have made this right SO easily.

We would like to thank all those who have supported us through this painful experience; where Sony has denied us our humanity you have confirmed it; where Sony have continued to degrade and silence us, you have heard us and felt our pain. We are grateful for you and we will continue to fight to be heard as the provision of safe places for black bodies is no longer up for debate. We may simply be “coloureds” to Sony, but these “coloureds” will continue to demand that this racist incident is addressed and that no other black person has to face this kind of humiliation at a Sony event again. ‪#‎MADDAreWeNotCitizens‬

Since the story broke out, other attendees at the event have come out in support of Imani and Sue. Nadia Essex, a celebrity love coach, was there that night where people of color in her group were refused entry:

“Twenty white people, not one black [person] were let in, even though they said they were at maximum capacity.”

Essex was with The Apprentice finalist Scott Saunders at the time. She said a member of the door staff “looked us up and down” and then told the group the club was at maximum capacity.

She said she wanted to speak to a manager about this and, as she was waiting, she heard a staff member say, “We’re not letting them in.”

He added: “We were all pretty much people of colour and we asked politely. We were all confused as to why we were refused entry and they let other people in.”

TayTay Starhz, who was allowed into the club, would not comment on the incident. His management told BuzzFeed News: “TayTay from Franklin Lake tried to assist Sue and Imani, however was told the event was to full capacity. Franklin Lake stayed for one drink and then left.

– Retrieved from BuzzFeed News Sanusi, V. (2016, May 23). Female YouTubers Say They Were Turned Away From A Launch Party For Being Black. BuzzFeedNews. Retrieved May 23, 2016, from https://www.buzzfeed.com/victoriasanusi/female-youtubers-say-they-were-turned-away-from-a-launch-par?utm_term=.udKNEqP5A#.ltEVgadZD

According to Imani, another attendee Ricky Raymond, whose plus one also happened to be denied entry because they were a person of color.
Although Citizen Relations issued a statement and had communicated with Imani and Sue’s agency, there is still no official statement from Sony Xperia on this matter. Sony Xperia has also not issued an apology or explanation privately. Instead, Sony Xperia has been deleting comments made by their followers and supports of Imani and Sue, on their social media accounts.

For more info on Imani and Sue Evans, visit their Facebook page http://www.facebook.com/imaniandsue